Explore ITCC’s industry influence via recognition of innovation and development of forward-thinking research and white papers. 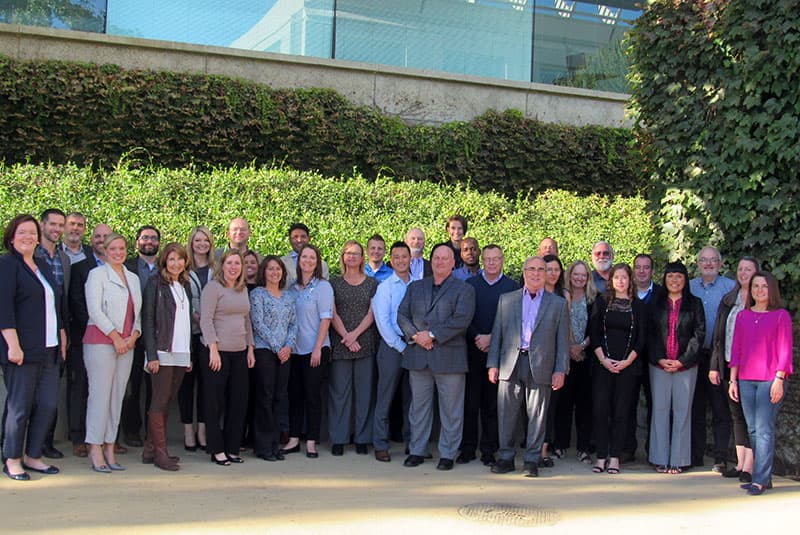 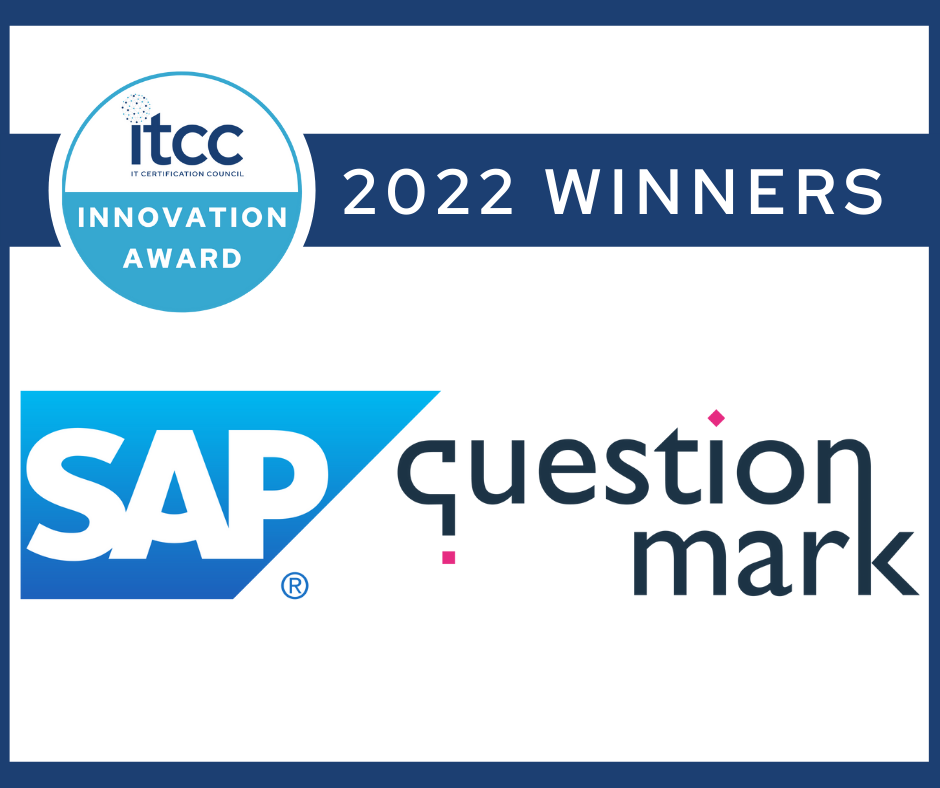 Have you or your team created a product, service or initiative that resulted in a positive impact to your company or the IT certification industry? Was it a project that helped improve the customer or test candidate experience or resulted in candidates more accurately being able to demonstrate their skills and abilities?

Now in its eighth year, the Innovation Award recognizes innovations in testing, processes, or service, within the IT certification industry. Over the years, winners have showcased success and innovation in increasing the security of testing, a new method for evaluations, improved market access to certification programs, and more. 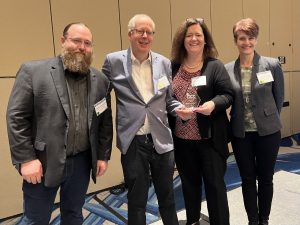 Join us in congratulating SAP and Questionmark for winning the 2022 Innovation Award for their innovative approach to enhancing support for non-native English speakers with their real time machine translation tool. 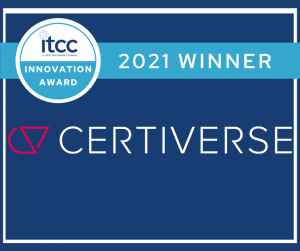 Join us in congratulating Certiverse for winning the 2021 Innovation Award for their innovative approach to addressing the industry need for a platform to bring together content experts and exam technologies, where organizations without in-house testing expertise can develop exams with dramatically reduced test launch costs, thus providing value and options to test takers.

Certiverse was selected from an overwhelming response of quality submissions for their innovative use of technology to create a virtual platform combining AI assisted development, automation and crowdsourcing SMEs, reducing development time and potential cost for exam development.

Runner Up: Microsoft performance-based testing initiative, which is a group effort by Microsoft, Netlogon, Learn on Demand Systems, Internet Testing Systems, and PearsonVUE. 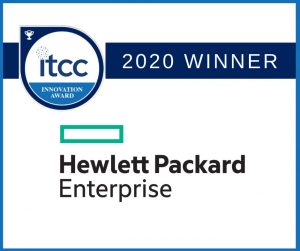 The ITCC announced HPE as the winner of their 2020 Innovation Award for their innovative approach with certification testing and their scalable, secure, remotely proctored, fully automated (consistent) scoring, practical exam on live hardware.

HPE was selected from a very competitive field of submissions. This innovation addressed the business need for scalable, globally delivered, practical exams, on live hardware to best ensure that partners and customers have the skills to design and deploy complex HPE solutions and elevate the value of their top-level certifications.

Runner Up: Lineup – Lineup is a SAAS-based platform that allows exam development organizations to create and curate their subject matter expert (SME) workshops or panels. It streamlines the process, not only managing administrative overhead that goes into putting together a workshop, but also highlights the diversity and makeup of each event. A high-quality certification should be written by a SME pool that represents the industry that it is certifying and Lineup was designed to do just that.

ISACA Honored as the IT Certification Council 2019 Innovation Award Winner 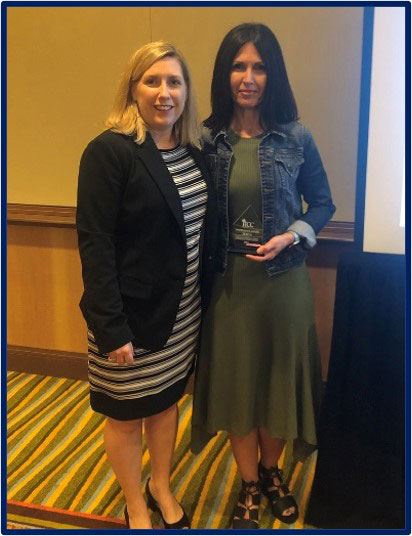 The ITCC announced ISACA as the winner of their 2019 Innovation Award. ISACA is a nonprofit, global association serving technology audit, assurance, governance and cybersecurity professionals. ISACA was chosen from a competitive field for their submission, “Innovation Name: Using Journey Mapping to Improve and Redesign the Customer Experience”.

ISACA used journey mapping as a holistic approach to provide alignment, build internal capability and to drive clear prioritization of decisions and investments that will have the greatest impact to customer satisfaction and loyalty with ISACA Certifications. The design process included employees from across functional areas, as well as their exam delivery partner PSI.  The journey map continues to be used as a teaching and prioritization tool.

Runner Up: Ericsson – Focused on the introduction of a new item fingerprinting technique, introduction of a new type of “SmartItem™” (Caveon) and implementation and collaborative research of DOMC delivery format, all of which were used to increase exam security, mitigate item theft, and better understand the impact of their use on exam results.

SAP Announced as Winner of IT Certification Council 2018 Innovation Award 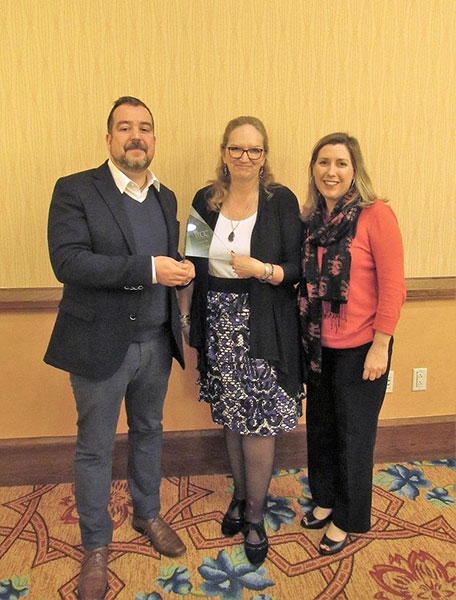 SAP has been named the winner of the IT Certification Council (ITCC) 2018 Innovation Award, recognizing innovations in testing, processes or service within the IT certification industry. SAP was selected from a very competitive field of submissions for their innovative use of Agile development within a certification program.

SAP implemented an agile cloud exam development and delivery to enable digital transformation for its stakeholders. Since implementation, speed of production and release of SAP Global Certification exams has increased. Additionally, participants have access to certification exams 24-7. 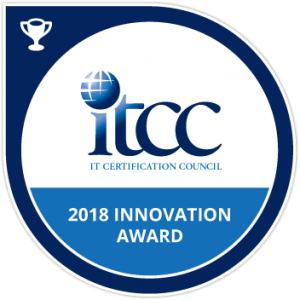 ITCC Honors Acclaim and IBM with the 2017 Innovation Award 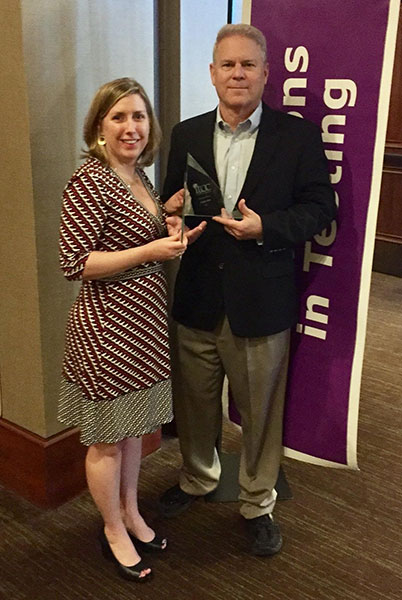 ITCC is thrilled to announce Acclaim / IBM as the winner of the 2017 Innovation Award. The award was presented at the ITCC Member Meeting during the Innovations in Testing Conference in Scottsdale, Arizona. The award was bestowed for the innovative learning recognition program created by IBM, as their goal was attracting, developing, and engaging a workforce of IT talent to support its strategic goals. The recognition program uses open badges, which IBM began issuing in 2015 through Pearson’s Acclaim platform. Working together, the two organizations developed and applied best practices to create an industry-leading badging program that is producing remarkable results, increasing learner engagement, and motivating skills progression across IBM’s talent ecosystem.

Through Acclaim, IBM has issued hundreds of thousands of open badges to recognize learning across its community. The two companies continue to innovate and educate together in an effort to spread the understanding and use of badges to attract, engage, and progress IT talent across the globe.

The 2017 Innovation Award was presented to David Leaser of IBM Training and Skills and Peter Janzow of Acclaim, a digital badging venture opened and operated by Pearson VUE. 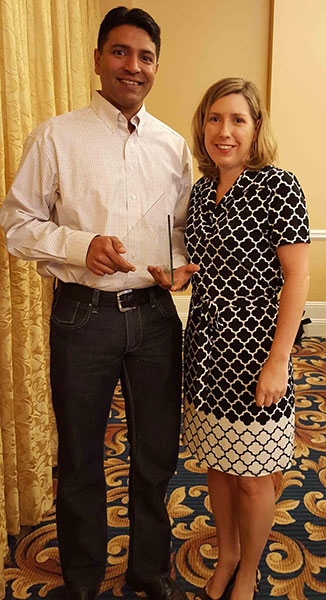 ITCC is thrilled to announce that the winner of the second IT Certification Council’s Innovation Award is The Linux Foundation. The ITCC bestows the award annually in recognition of achievements or inventions that benefit the advancement of IT certification. The 2016 winner was announced in March at the Innovations in Testing Conference held in Orlando, Fla., by the Association of Test Publishers.

This year’s award-winning innovation is a secure remote testing platform that developers at The Linux Foundation created to both improve the security of online exams and facilitate communication between test administration officials and exam candidates. The aim of the team that developed the platform was twofold: The developers wanted to improve access to testing for exam candidates in far-flung locales, but also improve both the caliber of the exams and the level of exam security. 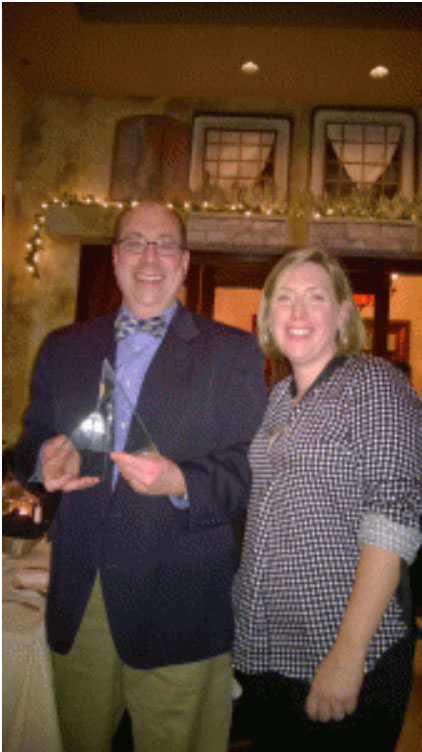 Larry Kaye, a Senior Product Manager of Certification, was announced earlier this week as the inaugural winner of the Information Technology Certification Council’s (ITCC) 2015 Innovation Award for his work on Microsoft’s AppToCert program.

AppToCert is designed to streamline how IT professionals earn Microsoft certs. Compared to traditional certification paths, AppToCert is more economical with respect to both time and money. Developers utilizing it are able to save hundreds of dollars and months of time preparing for and earning Microsoft certifications.

ITCC’s mission is to educate the IT certification industry about growing trends. 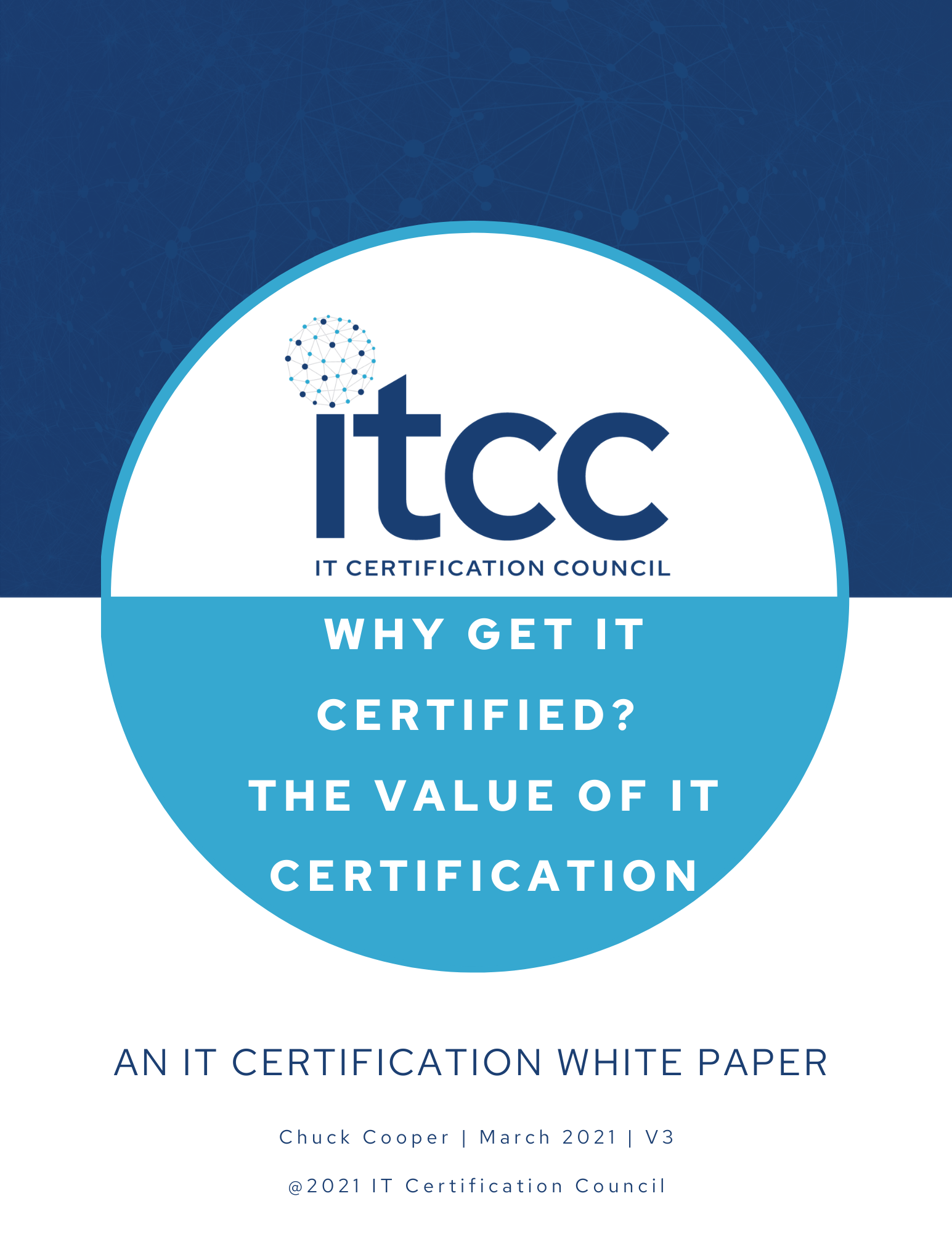 Why Get IT Certified? The Value of IT Certification

There’s something about the word “certified” when it precedes a professional title that conveys the consumers and employers a sense of trust, credibility, knowledge and an official “stamp” of approval. This is not a coincidence. IT certification has long been a proven means of differentiation and qualification among professionals in the industry. Employers often include certification as a prerequisite when seeking qualified candidates to fill positions; consumers often trust only those IT professionals who boast credentials proving they have attained a certain level of knowledge.

Agile product development can cause unique challenges for those creating certifications used to validate skills and knowledge on technologies that are constantly changing. The challenge is developing psychometrically sound exams for IT products developed at an increasingly rapid pace. This document serves as a guide to communicate considerations of moving to an exam development and sustainment process that is aligned to rapid updates in the underlying technology and executed in a way that ensures valid, reliable, and fair assessment of candidates. 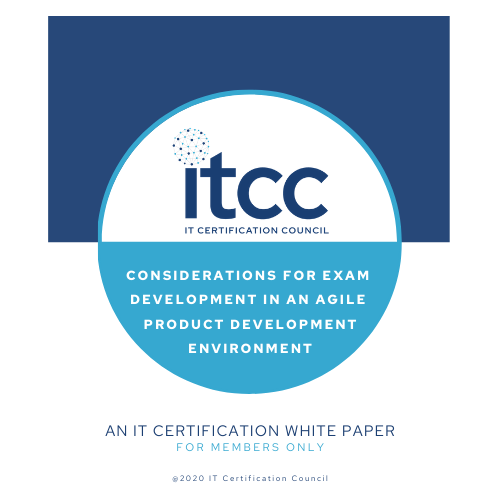 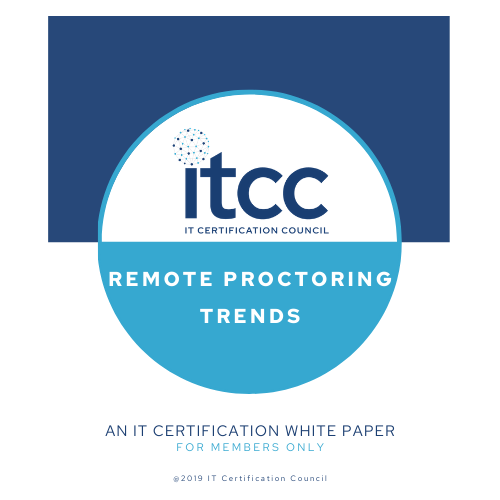 As more IT organizations implement remote proctoring into their certification programs, common challenges and opportunities are surfacing based on their experiences and those of proctoring vendors. This paper highlights interviews from ten organizations to better understand the types of remote proctoring available, new innovations, lessons learned and what lies ahead.

What's in a Badge?

Badges can be used to represent all types of accomplishments – obtaining a certification, completing a training curriculum, or attending a conference or webinar. So, how do you know what the individual did to earn the badge? It’s very simple: click the badge and see! 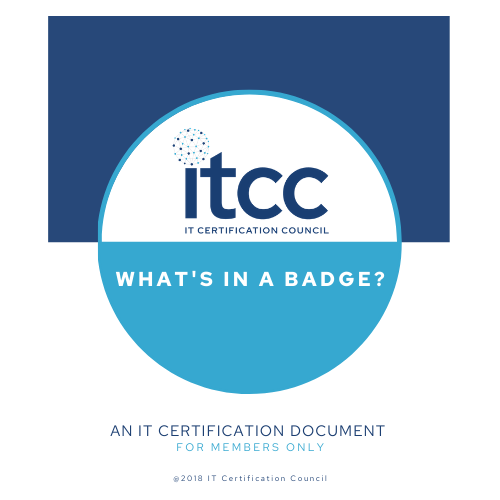 ITCC is proud to be affiliated with other industry associations supporting the certification ecosystem. 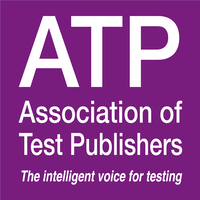